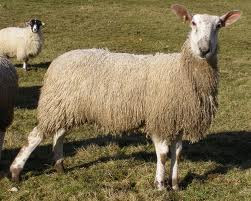 An unusual looking sheep, named "Blue Faced" due to the skin on its hornless, wool free head showing dark blue through white hair. The wool is tightly purled, fine dense and lustrous. It is light and soft to wear. 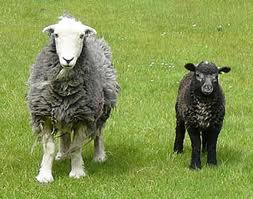 Herdwick sheep have a distinctive thick grey fleece well adapted to the harsh Lake District environment.
These sheep are the native breed of the central and western Lake District and live on the highest of England’s mountains. They are extremely hardy and are managed in the traditional way on the Lake District fells that have been their home for generations.
The Herdwick’s hardiness and ability to graze over a wide area of fell is key to the maintenance of the Lake District landscape as we know it. 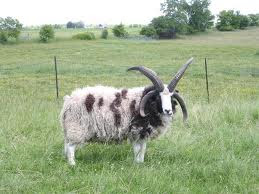 Jacob
An 'old world' breed of sheep, that has survived with very little human selection.
They often have 2, 4 or 6 horns and their physique resembles that of a goat. The fleece is dense and highly lustrous, the dark patches often growing longer or shorter than the white patches. 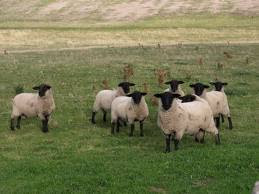 Suffolk
Probably the most numerous breed of sheep in Britain, the Suffolk is cream coloured with black faces & feet and drooping ears. They are mostly bred for meat, as their fleeces are fairly light. This makes for a soft and elastic wool 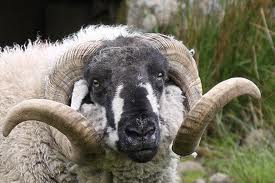 Swaledale
A hardy breed from the more mountainous areas of England - Cumbria, Yorkshire and County Durham. Sheep of both sexes grow curly horns, and the ewes are renowned for being excellent mothers, able to raise lambs in very harsh conditions with little to no human intervention.